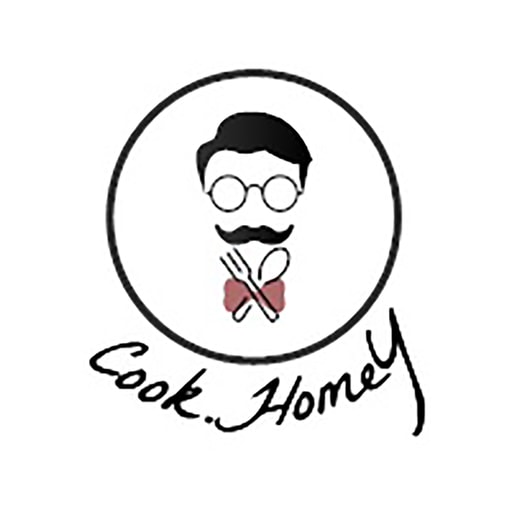 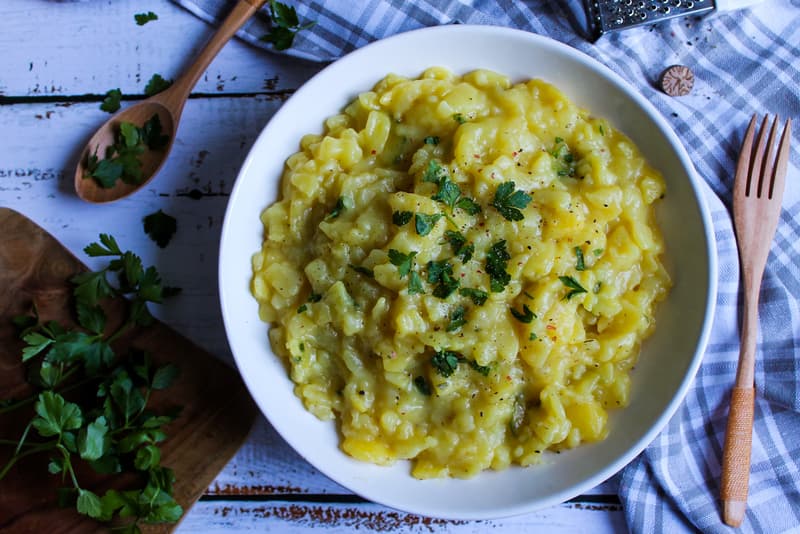 Potato salad. Which one will come to your mind first? The classic one with mayonnaise? Or vinegary German potato salad?

My first choice has always been my mom’s potato salad with mayo. And maybe it still is. I definitely love both, but it’s best to switch them up sometimes.

To be honest I haven’t eaten it very often in the past. But I’ve been living in Germany for a few years now and I have to say that Germans LOVE their Kartoffelsalat.

Make ahead German Potato salad is more or less the same as the Viennese potato salad recipe. It is also called Swabian or Bavarian potato salad.

How do you call it?

Regardless of what you call this salad and what German region it’s from, it usually contains the following ingredients:

What potatoes for potato salad?

For creamy German potato salad with onions, you must use waxy potatoes. They do not have a lot of starch and therefore retain their shape when boiled.

If you cut them into thinner slices after cooking, they keep their shape and don’t fall apart. Nevertheless, they will be nice and soft. You can look for Kennebec, Red Bliss, new or fingerling potatoes.

For soups, I would suggest using a starchy potato such as russet or Yukon gold. For example, this creamy potato soup needs to be made with these varieties.

Put the potatoes in a pot with their skins on. First, fill up with cold water so that they are just covered. Then add salt and bring to a boil.

After about 20 minutes, use a fork or toothpick to test whether the potatoes are soft in the middle. Better to cook them a few minutes longer than too short. Waxy potatoes cannot be overcooked as easily as other varieties.

It’s important that you prepare the salad dressing at the same time, as the dressing and potatoes need to be relatively hot when you mix them.

Most people make the dressing by simply mixing the liquid ingredients together and adding them to the potatoes.

However, this recipe differs in that we gently cook the vinegar, oil, mustard, and broth along with onions. As a result, the sharp taste of the raw onion disappears somewhat, and, most importantly, an emulsion forms between all the liquids.

This way you won’t feel like the salad is too oily. The oil does not settle on the surface but is well absorbed by the potatoes.

If you just added vinegar and oil to cold potatoes, the potatoes wouldn’t soak the dressing as much and the salad wouldn’t be as juicy.

Start with onions. Chop finely and sautée in a saucepan. Then add the mustard.

Not only does the mustard add excellent flavor to your salad, but it is also needed to combine broth, vinegar, and oil to form the desired emulsion. The consistency of the dressing will be uniform and the oil will not settle on the surface.

Then add the vinegar and season with salt, freshly ground black pepper and sugar. Stir and add the hot broth.

Let it cook for a few minutes and then gradually pour in the oil. You need to add it while whisking continuously so the liquids combine nicely.

By the time your dressing for potato salad is ready, the potatoes should be cooked too.

But the important thing is that they must also be hot. Therefore peel immediately and cut into thin slices. You can cut them with a knife or a mandolin. Place them in a large bowl.

Once you have sliced all the potatoes, immediately pour in the prepared (still hot) potato salad dressing. Mix gently and cover entirely with plastic wrap. Thanks to this, the salad will steam nicely and allow the sliced potatoes to soak up all the goodness.

After about an hour of steaming, add the finely sliced cucumber and mix gently. Then cover the bowl again with plastic wrap and let it rest for at least another hour (at room temperature).

When the potatoes have absorbed most of the liquid, mix well again. Mix the salad with your hands rather than a spoon so you don’t break and squash all the potatoes.

What to serve with German potato salad

This make ahead German potato salad goes well with many delicious dishes. It is typically served with schnitzels, for example, but is also suitable for bratwurst (which is a type of German sausage) or Vienna sausages.

It is also an excellent combination with various fish, arctic char to name one.

But I like to enjoy creamy German potato salad as a main course too. Without anything else. Just on its own.

If you really want the best potato salad without mayo, you need to try this recipe!

This make ahead German potato salad without mayo, also known as Bavarian or Viennese potato salad, is a fantastic side dish for many tasty dishes. You can enjoy it with schnitzel, sausage, or even on its own.

It is best to let the potato salad rest for at least 2 to 3 hours (or overnight).

As for the broth, you can also use a store-bought one or bouillon cube. But of course, homemade broth is better. Maybe you are going to make a German potato salad without mayonnaise on Saturday when you’re making fresh chicken stock anyway. If you want a vegan version, use vegetable broth. Otherwise, a nice chicken broth is a good choice, which brings a slightly more intense taste. 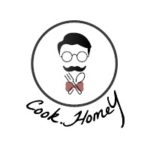 I’m Juraj and I come from Slovakia. It’s a small country in the heart of Europe. I believe you all love food and cooking as much as I do. On this blog you will find a variety of recipes that you can easily and joyfully prepare at home.

There are four Roman pasta dishes that must be part of your life!
View Recipes 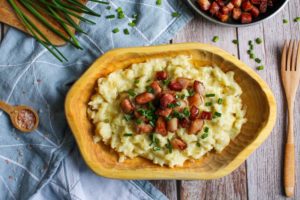 Gnocchi with Bacon and Sheep Cheese 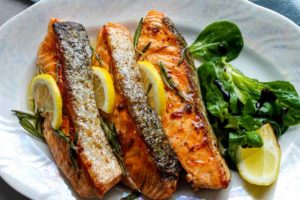 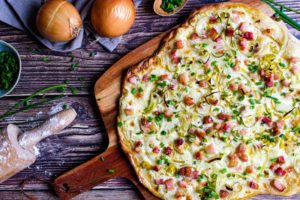 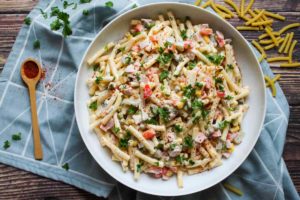 5 Recipes To Impress Your Partner

The Traditional Pasta Dishes of Rome

How to store potatoes, onions and other vegetables?

Our best recipes direct to your Email Box!

Manage Cookie Consent
To provide the best experiences, we use technologies like cookies to store and/or access device information. Consenting to these technologies will allow us to process data such as browsing behavior or unique IDs on this site. Not consenting or withdrawing consent, may adversely affect certain features and functions.
Manage options Manage services Manage vendors Read more about these purposes
View preferences
{title} {title} {title}

Bring more fun to your kitchen!

Have the latest recipes and ideas
delivered right to your inbox.